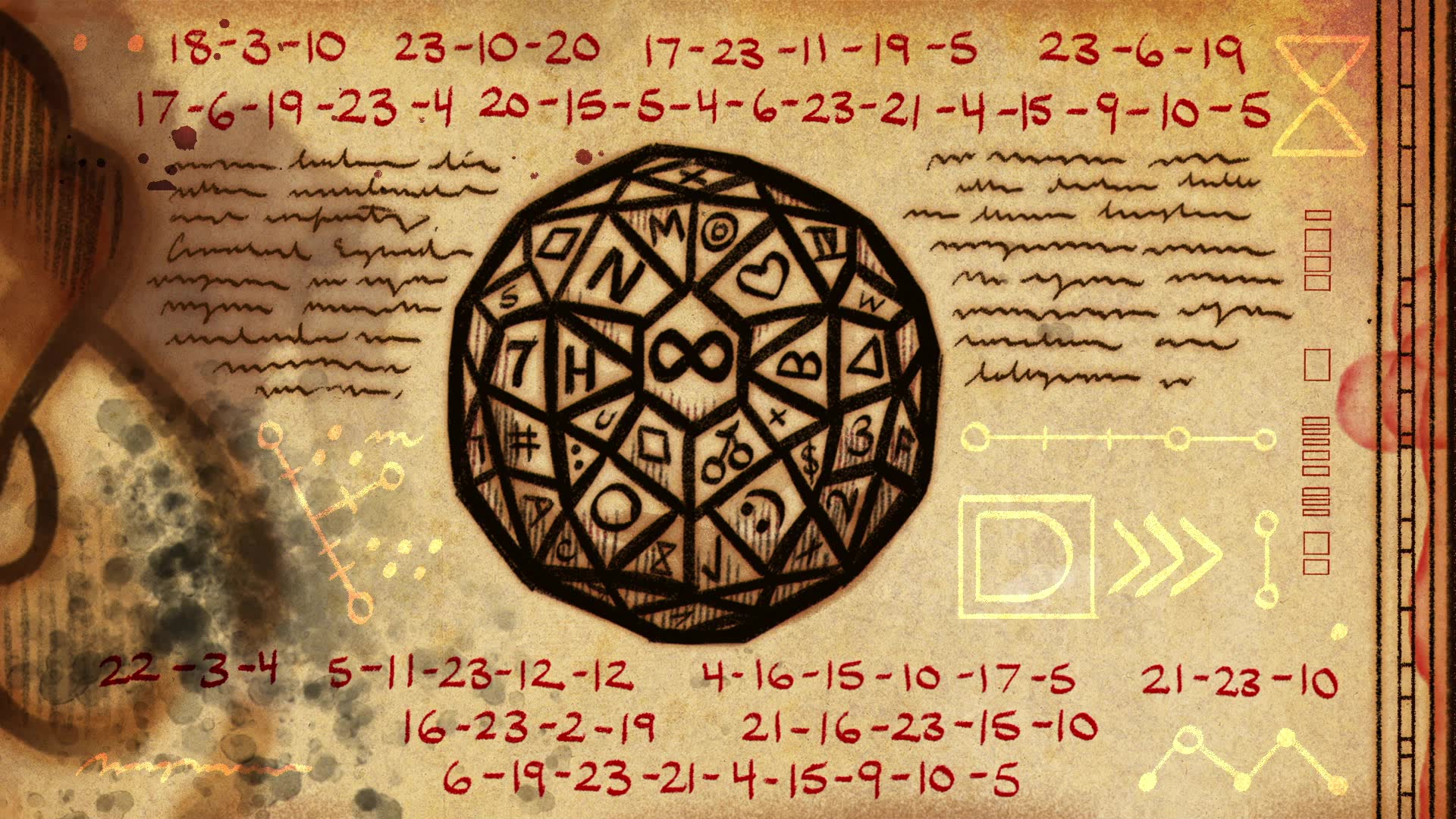 Okay, RPG fanatics, it’s time to play one of my favorite time-killing games, “The D&D Alignment Game”! Which of your favorite characters falls into which Dungeons & Dragons-prescribed boxes?

If you need a little background, characters in the Dungeons & Dragons worlds are saddled with “alignments”–personality traits and motives that dictate their behavior. But appreciating the nuances of these traits and how each might be personified has led to a lot of nerd sparring. I’m sure that’s how this game started–just apply the cryptic guidelines to pop culture examples and you can help others to understand why they are totally and utterly wrong.

This is the game I play (sort of like the “desert island” game) when I’m stuck in an airport or waiting for my show to finish downloading. Or that time after you’ve ordered your food at the restaurant and you’ve run out of other conversation. What I love best is the number of heated arguments that has launched between me and my husband. I yell at him that he doesn’t understand the definition of “chaotic”, and then he yells that Jaimie Lannister absolutely does not fall in the evil category. Then I stab my fork into a dinner roll, yell something about Cersei’s vagina, and everyone in the restaurant stares. Good times.

Anyway, here is today’s inaugural post for this game. I just had to start with my favorite animated show of all-time, Gravity Falls (sorry, Muppet Babies). Take a look at the chart below to see how some of the characters might fit into the Dungeons & Dragons world (or as Dipper would say, the “Dungeons, Dungeons and More Dungeons” world). What do you think? Do I have it right?

(I’ve even put a handy little glossary at the end if you aren’t sure what these mean.) 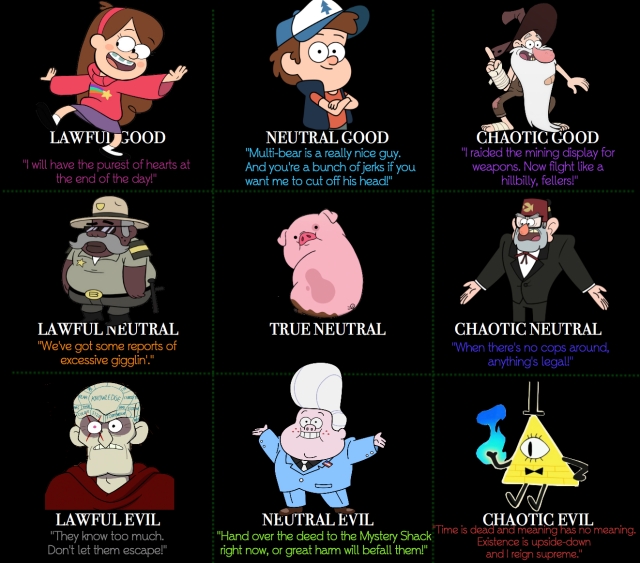 LAWFUL GOOD: This is your law-abiding hero who has unwavering faith–faith in law and order, faith in good, faith in honor. And sometimes faith in a deity or two or ten or twelve. Their faith may blind them, but damnit, they have their principles and as long as they follow them, they can better the world and save countless creatures.

NEUTRAL GOOD: The pragmatic hero who seeks to help and save, and can see the virtue in straying from laws or codes if good can come of it. Rules and order are nice and all, but sometimes you have to jaywalk to save a kitten.

CHAOTIC GOOD: This hero is the bane of every law office and government. And the feeling is mutual. Structure, governments, organizations, and rules cannot be trusted to do the best for the world, so the chaotic-good hero must subvert order and promote freedom, all while doing the most good possible. After all, if you can’t commandeer an ice cream truck on a hot day to help a bunch of overheated and hungry puppies and children, then what good are you, really?

LAWFUL NEUTRAL: This is your rules lawyer who adheres to a code, come hell or high water. The rules must be obeyed, whether they ultimately help or harm. “Mother said I can’t cross the road, so I can’t save you from the runaway steamroller. Byeeee!” Their faith in structure is a holy thing.

TRUE NEUTRAL: This is found in the balance of nature. The true neutral creature sees harmony in both light and dark, order and freedom, good and evil. The true neutral is tethered to no side, and can change sides as situations evolve. Instinct can be one motivating factor for the true neutral, and it is said that animals are often of this alignment.

CHAOTIC NEUTRAL: Just when you think chaotic neutral is going to zig, she zags. She’s on the side of good one moment, then she’s joined forces with evil because they have cake. Often impulsive and unpredictable, chaotic neutrals seek freedom.

LAWFUL EVIL: This is the con artist or killer who uses law, order, and/or a code to manipulate the world. After all, the most efficient evildoers have a system, right? Through rules, the lawful evil character can control others, gain power, and swindle. Tyrants, overlords, and Scientologists.

NEUTRAL EVIL: Whatever it takes, as long as I get what I want. This is the evildoer who will use laws, codes, systems, governments, and religions to manipulate others for his gain. But when the order and systems don’t deliver power, wealth, or anything else that the neutral evil wants, there’s nothing wrong with calling down some chaotic thunder. “You’ve been a valuable henchman, and…ooh, I want your cheeseburger.” BOOM!

CHAOTIC EVIL: Cruelty, thy name is chaotic evil. Forget rhyme, reason, or organization. Chaotic evils see others as disposable playthings and don’t work well in pairings or groups. No one can be trusted, and often even money is pointless. It’s all about the pleasure.